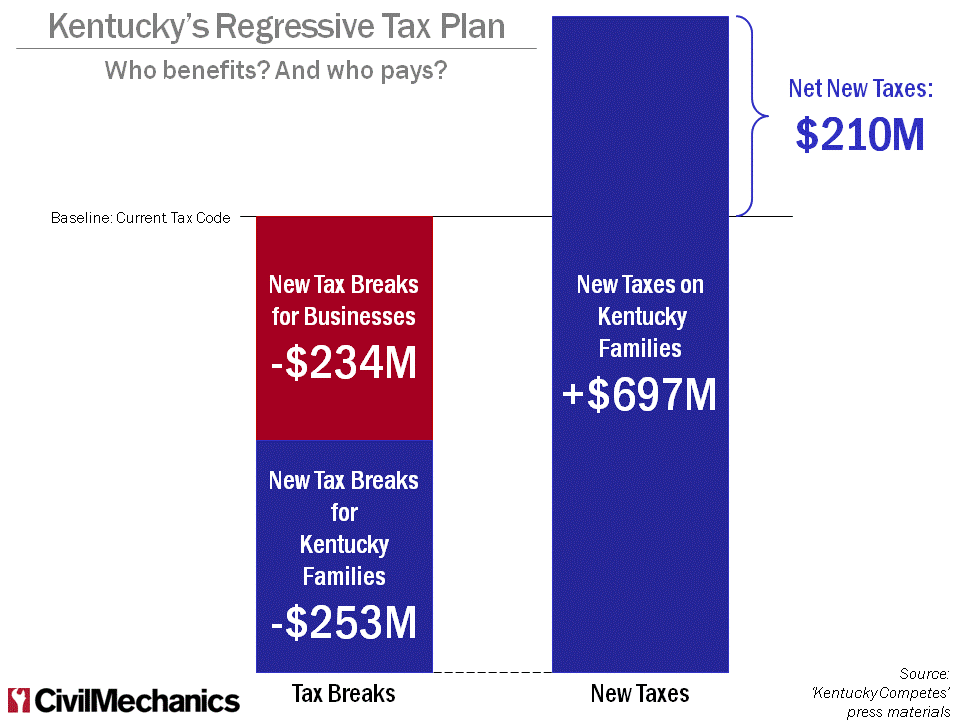 I was pleased to be asked to comment for today’s story by Jack Brammer and Janet Patton for the Herald-Leader on the Governor’s tax proposals. They did a great job accurately representing my views. This post helps elaborate on my perspective.

Dubbed “Kentucky Competes“, Governor Steve Beshear’s tax proposal consists of more than 20 changes to our state’s tax code. The proposal contains a number of troubling components which place a disproportionate burden on Kentucky’s poor, while providing large annual tax breaks which are skewed toward businesses and the wealthy.

Let me step through each one in turn. 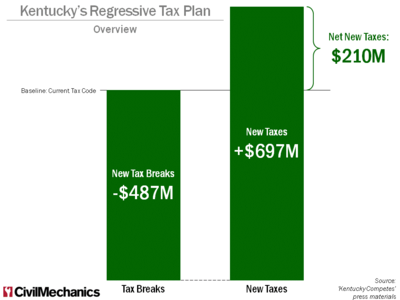 Governor Beshear’s proposals would generate an additional $210 million for the state. But like many tax reform initiatives, Beshear’s plan contains a mixture of new taxes and new tax breaks.

The Governor’s plan contains approximately $487 million in new annual tax breaks, more than offset with about $697 million per year in new taxes.

That’s nothing especially disturbing, given that the reform plan is supposed to put the state on sounder financial footing, and raising taxes is one way to do that.

What is disturbing is how the mix of breaks and taxes are allocated. Nearly half of the Governor’s tax breaks go to businesses (amounting to $234 million per year). So what’s their share of the new taxes that Beshear proposes? Nearly zero: 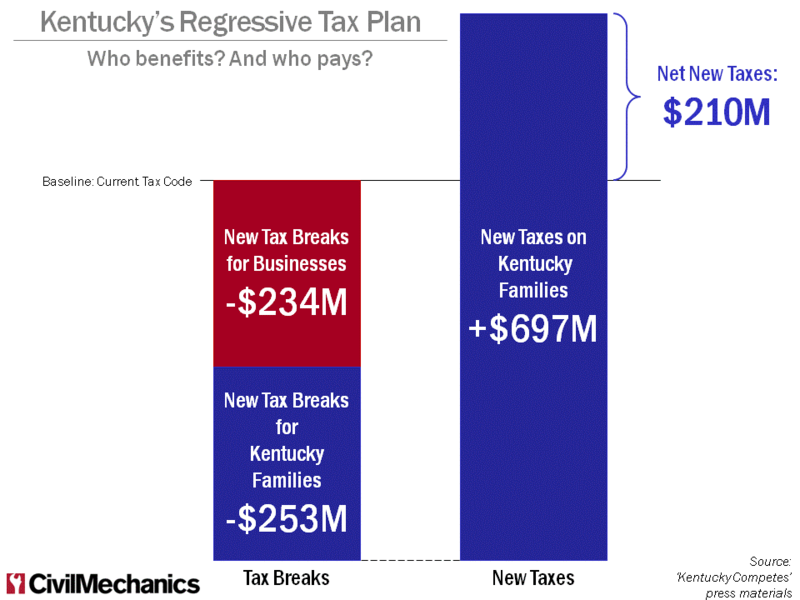 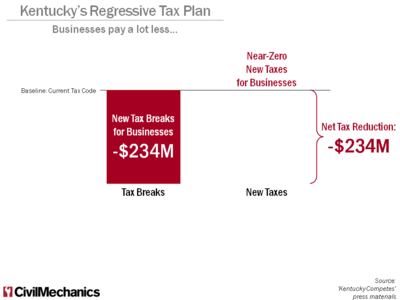 I say ‘nearly’ zero because there will be some businesses which pay the new sales taxes for covered categories like auto service or computer repair. But given the exemptions and restrictions on these new sales taxes, the business share of the almost $700 million in new annual taxes will likely be very, very small.

So businesses (some of them, at least) will get a collective windfall of more than $234 million per year under Beshear’s plan, while simultaneously contributing no new taxes to the state.

Throughout the documents Beshear’s office released yesterday, there is the notion that this corporate giveaway will help Kentucky “compete for quality jobs.” The underlying assumption is that if “job creators” are given enough tax cuts, that they’ll hire our way to prosperity. This notion is, at best, misguided; at worst, it is an outright lie.

As I have written before (more than once, in fact), business owners do not hire because they have extra tax-cut money lying around. We hire because we have work to do, and we need someone to get it done. We hire when there’s more demand. 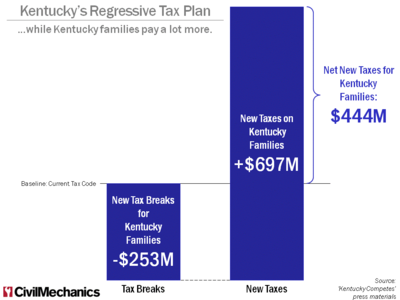 Meanwhile, because businesses wouldn’t pay these new taxes, the burden is placed squarely on Kentucky’s families. When paired with the tax breaks for individuals, Kentucky households would pay about $444 million more in new taxes each year (or approximately $260 per household.)

While the Governor trumpeted the ‘relief to every working Kentuckian’ yesterday, the hard truth is that his scheme raises taxes on nearly every working Kentuckian in order to fund an enormous tax giveaway to select (usually large) businesses. This plan is a stunning, brazen, and inexcusable attempt to redistribute wealth from those who can least afford it to the already-wealthy.

Sales taxes are an incredibly regressive tool for raising money for Kentucky. They are regressive in the sense that sales taxes hit poorer people harder than wealthier ones.

Why are sales taxes especially burdensome for the poor? Because the extra tax takes up a greater portion of their income for the same product or service. The extra tax just hurts more.

Even though the Governor’s proposal includes some $72 million in Earned Income Tax Credits (credits for the working poor – generally a good contributor to the economy and job production), he bleeds those benefits away with new sales taxes.

And the proposed sales taxes are almost exclusively in consumer services, while sales taxes for business services are largely exempt.

Ordinary Kentuckians would not benefit under Beshear’s regressive plan.

The Governor’s plan also targets only certain kinds of labor for sales tax expansion. In particular, it chooses to apply sales taxes to labor involved in the “installation, maintenance and repair of taxable personal property.” In other words, the repair and service of personal items (like cars or computers) would be taxed under Beshear’s plan.

But not all service labor is equal, under the Governor’s scheme. Other kinds of labor – say, accounting or legal services – would be exempt from the new taxes. And who disproportionately uses a lot of those exempted services? Businesses and the wealthy, of course.

Even within the “installation, repair, and maintenance category”, there are exclusions. Because these new taxes apply to ‘personal property’, they exclude repair and maintenance services for machinery, farms, and real estate properties — the kinds of services consumed in greater amounts, once again, by businesses and the wealthy.

By steering the new taxes away from services which impact the wealthy, Beshear hits ordinary Kentuckians especially hard.

Governor Beshear’s new tax proposal is an audacious attempt to take wealth from Kentuckians who are hardest hurt by our economy, and attempts to transfer that wealth to the already-well-off.

It is a colossally bad idea which will leave millions of Kentuckians worse off. And we shouldn’t let him get away with it.

After the jump: Backstory

Yesterday afternoon, Janet Patton from the Lexington Herald-Leader called me to ask what I thought of Governor Steve Beshear’s proposal to increase taxes on auto repair.

I was caught flat-footed — and a little embarrassed. I had to admit that I hadn’t kept up with the tax proposals, and that I really didn’t know anything about an “auto repair tax”.

I asked Janet what the tax entailed, and she explained that part of the Governor’s proposal included adding sales tax on the labor involved in auto repair.

At this point, I finally started to understand the proposal.

In the auto repair industry, our sales come from two major categories of charges: 1) the work we do in servicing cars ( “labor”), and 2) the parts we use during that service. While the proportions vary from shop to shop, labor and parts each account for roughly half of our sales.

Under the current tax code, we only add sales tax to the parts “half” of our business.

The labor “half” is not taxed. And this is what the Governor is proposing to change.

The new proposal would add sales tax to our labor charges, and effectively double the sales tax on auto repair from roughly 3% to 6% of our sales.

I explained to Janet that this didn’t really affect Lowell’s directly. We would charge exactly the same amount for our parts and labor, but our customers would pay more in sales tax.

We simply collect and hold these sales taxes from customers throughout the month, and then we pass those taxes along to the state in the following month. As I understood it, Governor Beshear’s proposal would mean that we would be collecting more from customers, but it wouldn’t affect the profitability of our business.

I also explained that the biggest deal for us would be the changes we’d have to make to our systems to recalculate sales taxes. I didn’t think the changes would be huge, but thought that there could be some hidden challenges there.

After getting off the phone with Janet, though, it really bothered me that I was so uninformed on this new tax proposal.

So I started digging into the details. And what I found bothered me even more.

Dubbed “Kentucky Competes”, Governor Beshear’s tax proposal consists of more than 20 changes to the tax code. The proposal contains a number of troubling components which place a disproportionate burden on Kentucky’s poor, while providing large annual tax breaks which are skewed toward businesses and the wealthy.

Realizing that I had totally missed these inequities in my discussion with Janet, I dashed off a note revising my comments. (Luckily, she was able to use my revised thoughts in the final product, even on deadline.)