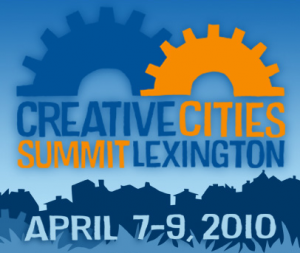 Lexington hosted the third installment of the Creative Cities Summit late last week (previous editions were in St. Petersburg in 2004 and Detroit in 2008), and the event was headlined by internationally-recognized experts in urban growth and vitality: Charles Landry, Rebecca Ryan, Richard Florida, and Bill Strickland, among others.

The event drew participants from across North America, but most of the attendees seemed to be from Lexington.  And while Lexington was not the central focus of the event, our city naturally entered into many of the conversations.

In the wake of the event, a vigorous local debate emerged about whether Creative Cities was significant for our city.  What’s intriguing is that much of the debate is occurring between folks who normally get along.  And much of the negative criticism is coming from folks that I like and respect (see here, here, here, and here), and who aren’t typically curmudgeonly.

That criticism has led to head-scratching – and, at times, indignance – from those who felt that the summit was a worthwhile, transformational, and enlightening experience.

And that leads us to an interesting – and telling – distinction: Most of the attendees of the summit seemed energized by the discussions and the ideas which emerged from Creative Cities; Most of the criticism came from those not in attendance.

There seem to be three basic criticisms of Creative Cities:

1. It was too exclusive.  This criticism usually centers around conference participation: who was invited, who wasn’t, and the perceived snobbery of some of the attendees.

2. It was too expensive.  This criticism focuses on the $199 registration, and whether the scholarships to the event were adequately publicized.

3. It was too much talk (and much of that talk was self-involved drivel).  This criticism takes multiple forms, including:

As an attendee of the summit, I find a kernel of truth in all of these criticisms.  But I don’t think that any of them are completely fair, and none are particularly helpful in crafting a better future for Lexington.

I have to admit I’m not all that patient with the ‘exclusive’ or ‘expensive’ arguments.  Everyone was invited; everyone had a chance to participate.  While the price of the event was problematic for many, it was far cheaper than similar events with participants of this caliber.  Events like this cost a lot – and high-quality speakers, food, and facilities are necessary to draw a national audience.

What concerned me the most about these critiques was that the perceived exclusivity or expense of the event often became an excuse for dismissing the good ideas which arose there: A good idea is still a good idea, even when someone has to pay to hear it.

And if the criticisms of conference ideas are based upon bruised egos and hurt feelings, then I’ve got zero patience for that.

I’m much more sympathetic to the ‘too much talk’ reasoning.

Before I bought Lowell’s, much of my corporate life was spent in the company of very skilled consultants: research consultants, design consultants, business strategy consultants.

There was a predictable part of nearly every consulting engagement where the consultant would suggest that hiring them for another engagement was part of the solution to the problems we hired them to resolve – “The way you fix that is to hire me again!”.  Consultants always position themselves for doing more consulting.

We did get to see that angling-for-the-next-gig routine with some consultants at Creative Cities.

And admittedly, there was a little too much excitement over slick ideas and catch-phrases, and not enough thought about the hard work needed to truly transform Lexington for the better.

But that hard work isn’t what a conference is for: The summit was for learning and for exchanging ideas; the hard work comes after.

The structure of the conference didn’t help its perception – especially on Twitter – for those who didn’t attend.  In the process, I think some of the shortcomings of Twitter for civic conversations like these were exposed.

The most compelling (and, presumably, highest-paid) ‘keynote’ speakers addressed all participants at the same time.  For these speakers, attendees usually tweeted about the same inspiring messages, giving rise to the echo-chamber perception.

For instance, when Bill Strickland spoke at the end of the conference, many non-attendees mocked his ‘poor people should be considered assets, not liabilities’ line.  They seemed to say What fool would pay to hear something so blatantly obvious?

When those present tweeted the ‘assets’ line, they were truly moved and inspired by Strickland’s story and context.  Those outside the venue only saw vacant platitudes.

This same pattern repeated itself again and again throughout the other keynotes: The rich, compelling images and backgrounds and stories couldn’t traverse Twitter effectively; only the catchiest (and apparently empty) phrases made it out.

In between keynotes, there were 4 simultaneous breakout sessions.  While the breakouts weren’t as inspiring (or ‘tweet-worthy’), they were far more practical and hands-on about the mechanics of transforming a city for the better.  They were – for me – the most beneficial part of the conference.  I learned about:

From the discussions around my table, other Lexingtonians learned even more from the sessions I wasn’t able to attend.  We also talked with people on the ground in Atlanta, Des Moines, and San Antonio about their experiences in their cities.

Because I was so busy listening and taking notes, I was much less occupied with getting the word out on Twitter.  I saw this effect repeated with other attendees, as well.

So the resulting Twitter stream was decidedly biased in favor of the least-important, most self-helpy kinds of messages, while the deeper, more important insights went relatively silent.

And I think that is the source of the skepticism and derision from those ‘out-of-the-room’, while those ‘in-the-room’ were decidedly enthusiastic about how the event played out.

Will the Creative Cities Summit matter to Lexington?

It is far too early to tell.  It will take time, work, and discipline to realize the vision that many of us had leaving the summit.

Should the Creative Cities Summit matter to Lexington?

Seeing the innovations that other cities have applied in improving their quality of life is vital as we attempt to build a better Lexington.  We need that kind of cross-pollenation with our own innovative initiatives to ensure the best possible future for us and for our city.

For those who feel as though we need a lot less talk and a lot more action, then mark this coming Saturday 17th April on your calendar.  That is when ProgressLex is hosting the Now What, Lexington? ‘unconference’ at the Carnegie Center in Gratz Park.

Now What? is explicitly geared toward generating tangible action from the ideas of the Creative Cities Summit.  Whether or not you attended Creative Cities, you should come to Now What? if you want to join with others to make Lexington better.

Now What? will be tweeted, too.  But it will be better if you show up.  As we’ve seen, Twitter isn’t always the most effective medium for conveying important ideas.

It is free.  Everyone is invited.  We’ll be doing things.  No excuses.

7 thoughts on “Will Creative Cities Matter?”