The Tombstone at CentrePointe 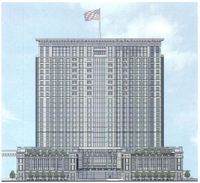 We last wrote about CentrePointe one year ago this week.

In Tangled Webb, we wrote about the folly of the CentrePointe development, capping a series of posts chronicling our growing skepticism about the downtown Lexington project’s financing and viability.

We then stopped writing about CentrePointe because there wasn’t much left to say.

Four months later, Business Lexington reprinted Tangled Webb, prompting an aggressive and condescending response from CentrePointe’s developer, in which he simultaneously attacked us, bloggers in general, and Business Lexington.  He asserted that we knew “little about commercial real estate development or the potential and viability of this project”. 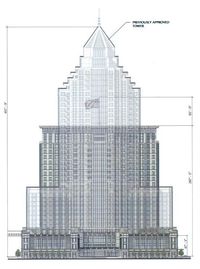 A New CentrePointe?
Yesterday, finally admitting that his financial backing had failed and that his initial design wasn’t viable, the developer submitted a smaller design for CentrePointe to the Courthouse Area Design Review Board (CADRB).

The new tombstone-shaped design (shown at right, superimposed over the older design) is 210 feet shorter than the one that the CADRB had previously approved.

The project still proposes a 237-room J.W. Marriott, along with office and retail space.  The upper tiers of the project would house 63 high-end condominiums (scaled back from the originally-proposed 91).

The developer asserts that “progress is being made” on “more conventional financing”.

What is the CADRB?
Within Lexington’s crazy-quilt of planning bodies and agencies, the CADRB is a five-person board commissioned by the Urban County Council to oversee a small portion of downtown called the Courthouse Area Design Overlay Zone.  The CentrePointe site falls within this irregularly-shaped zone.

On July 8th, 2009 the developers sought – and received – an early extension to their November 2008 authorization permit.   That third permit expires less than 30 days from today.

The Overlay Zone is intended to “encourage growth and redevelopment in the downtown area, while preserving and protecting the unique features and characteristics of the area.”  As outlined in its bylaws, the CADRB has 5 mandates:

Since initial approval, the CentrePointe site has been, by turns, a pit of rubble, a dust bowl, a pond, and, now, a horseless horse pasture with huge signs heralding how CentrePointe is “Coming Soon”.

By issuing demolition and construction permits for the CentrePointe site, the CADRB failed on every one of its own mandates.  The development has failed to bring value to the community.  It has failed to deliver the promised 900 jobs.  It has failed to preserve the character and quality of Lexington’s heritage.  The fantastical proposal never had the right scale or proportion for the Overlay Zone. Along every dimension, CentrePointe has been a collossal failure.

In light of that multidimensional failure, now is the time for the CADRB to take corrective action.

While scaled back in height, the new ‘Pointe-less’ design for CentrePointe is no less problematic than the old one.  It fails to address some of the project’s deep, long-standing flaws. These include:

Financing: While the developer asserts that progress is being made on new funding, this is actually a step back from previous assertions that funding was already in hand.  On June 4th, 2009, the developer assured the Lexington Forum that he had two ready sources of funding if his dead mystery financier’s estate didn’t come through.  Yesterday’s application for extension made it clear that those sources failed as well – if they ever existed at all.

Capital flows to the most promising investments, even in a difficult economic environment.  The fact that the developer has yet to secure funding for CentrePointe speaks volumes about its quality as an investment.

Business Model: The developer has continually asserted that he has a ready list of tenants for the property.

But there are enough problems with his business model assumptions to call the viability of the entire project into question.

Vague Assurances & Broken Promises: The developer has offered many claims – but little substance – with regard to the project’s viability.  He has repeatedly decommitted from previous promises.  When challenged, the developer usually responds by playing either victim or bully – and, sometimes, both at once.

It is time to openly challenge the developer’s overreaching claims and blithe assurances.

Scale: CentrePointe’s proposed tower has never had the appropriate scale for the historic character of the Overlay Zone.  The CADRB’s approval of the initial designs and subsequent re-approvals were mistakes.

Now is their chance to undo those mistakes.

They have a responsibility to ensure that our community does not end up with – in the words of former Councilmember Don Blevins Jr. – a “vertical Lexington Mall”.

When the developer presents CentrePointe’s new design to the CADRB on June 30th, the board should do the following:

Ask the tough questions.  Especially the ones which weren’t answered the first time.

Require documentation.  Don’t accept the developer’s word at face value.  His proven inability to deliver on previous promises mean that he should be required to document the stability of his financing and his business model before any design is approved.

Rethink prior approvals. As mentioned above, the CADRB made a mistake by approving the old design of CentrePointe.  Don’t just rubber-stamp the new ‘tombstone’ design.  Make sure it works with the surrounding community.

The Overlay Zone exists for a reason.  On June 30th, The CADRB should fulfill their duty to ensure responsible economic development within the Zone which preserves the unique character of our downtown.

The old design of CentrePointe didn’t do that.

The new one still doesn’t.

The CADRB should reject the application for extension.

3 thoughts on “The Tombstone at CentrePointe”