On November 2nd, Lexington chooses its mayor.  I’ve spent much of the past few years observing the two candidates in action.

Here, I address why one candidate is the right choice for Lexington, and why he will lead our city to a more prosperous and successful future.

I first got to know Jim Gray personally about a year and a half ago.  After I had written about Lexington several times, I was pleasantly surprised when he asked to meet with me.

I had long admired Jim’s accomplishments as a successful businessman and civic leader.  But as we talked about our backgrounds and about his experiences as Vice Mayor, I realized that this was the man Lexington needed to lead our city to a better future.

Jim Gray is the right person to lead Lexington back to prosperity. Let’s explore why.

Humility
For all of his accomplishments and personal achievements (more on those in a bit), Gray is surprisingly humble about his success. Gray’s humility manifests itself in a number of important ways.

While his humility helps him lead and inspire those who work with him, it doesn’t always serve Gray well in politics.

For one thing, bragging comes unnaturally to him – he finds it awkward and unseemly to crow about what he has done and how he has led.

For another, he is inclined to be magnanimous – sometimes maddeningly so – with his political opponents.  While his opponent kicked off the campaign by attacking Gray, Gray has kindly maintained that his opponent “is not a bad guy, he’s just made some bad decisions”.

Accomplishments
Looking around the city and the commonwealth, Gray has left a lasting economic legacy which will serve our community long after his political career is complete.

Gray has led Gray Construction to be one of our city’s most innovative firms, and the company has a long record of job creation and city-building. 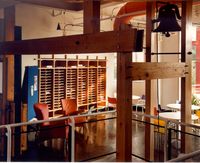 It starts with Gray Construction’s downtown Lexington headquarters, located in the old Wolf Wile building.  Gray took a dilapidated building and transformed it into one of Lexington’s most inspiring workplaces.  The building stands as a stellar example of blending historic preservation with economic development.

But Gray’s accomplishments don’t stop there.

From here at Lowell’s, we can see Sayre’s Buttery and Upper School. Both buildings use modern building materials and techniques, while maintaining consistency with our historic North Limestone neighborhood.  That is a trademark of a Gray urban construction project.

In other parts of Lexington, Gray Construction projects include:

Gray was instrumental in the inception of the 21c Museum and Hotel in Louisville.  Combining the best of old downtown Louisville with new design and materials, 21c has now been voted the #1 hotel in the U.S. for two years in a row.

Gray has changed the face of Lexington and of Kentucky for the better, and our community is more beautiful and more economically vibrant as a result.  He knows what makes a city thrive.  And he knows what businesses need to create jobs.

Insights
Jim Gray brought his experiences and insights from the business world to his (part-time) role as Lexington’s Vice Mayor.  He has had a knack for asking the right questions and doing the right things while in office:

Some have dismissed Gray’s actions as ‘grandstanding’.  But when we look back at the record, we see that he was right to ask these questions.  Every time.

Vision
Gray has been able to synthesize his business experience, what he’s learned about city goverment, and what he has heard from our community into a new vision for what Lexington could be.

But beyond a simple and unactionable vision, Gray has also detailed a ‘Fresh Start’ plan to specify what he will do as mayor.  The plan helps translate Gray’s vision into actionable steps.

Don’t agree with something in Gray’s plan?  Let him know.  Challenge him to make it better.  Tell him how.  As he says, the plan “is designed to be intelligently changed”.

Gray’s plan also reveals something even more important about Jim Gray: He has been thinking carefully about the future of Lexington.  He has kept his eyes open.  He has listened to our citizens.  He cares deeply for our city.

And, he has very good ideas for making Lexington an even better place to live and work.

I think we should give him the chance to implement his vision.

On November 2nd, I hope you will join me in voting for Jim Gray as Mayor of Lexington.  I give him my whole-hearted endorsement.

One thought on “Right.”