And now for the hard part… 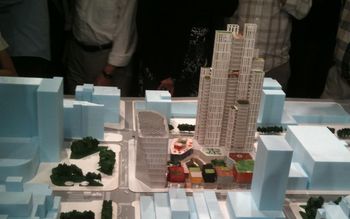 Critics have identified three interrelated categories of problems for CentrePointe since it was introduced to the public in 2008:

And CentrePointe has consistently failed across all three dimensions.  It didn’t fit Lexington.  It couldn’t be financed.  And it wasn’t viable.

As the project has changed trajectory in the past few months, it is worth re-examining these critiques.

Context
The first three iterations of CentrePointe were uninspired and uninspiring.  The designs seemed devoid of place – as though they could be plopped down on any block in any random city – Nashville, Atlanta, Phoenix, Detroit.  There was nothing about the designs which was particular to Lexington.

The bland and imposing structures were also the architectural equivalents of bullies – crowding Main Street, unwelcoming to pedestrians, overshadowing nearby buildings, and oblivious to the surrounding fabric of downtown.

The heavy-handed designs seemed to mirror the developers’ if-you-don’t-like-it-well-that’s-just-too-damn-bad demeanor.

In recent weeks, however, we have begun to see much more hope for CentrePointe.  With help from the mayor, the developers engaged Chicago’s Studio Gang Architects (SGA) to reconceive the site. And the developers have interacted much more with the public and the press – including a quasi-interview with the developer which utilized our questions from an earlier post. (We’d like to ask some follow-ups!)

Jeanne Gang presented her firm’s initial architectural concept for the CentrePointe block to a packed crowd at the Kentucky Theatre last week.

It was a great design.

And like most great designs, it poses elegant solutions to several problems at once.  Here are a few highlights which caught our attention:

Studio Gang have crafted this particular design to this particular spot in Lexington, and the result is very encouraging.  Lexington may finally have a signature project worthy of the center of our city.

Financing
The changes in the nature of the CentrePointe project don’t alter the economic environment for getting the project funded.

While now armed with a world-class architect and a world-class design, the developers are still faced with the enormous challenge of finding funding while the commercial real estate market remains in severe recession.

Viability
Our central criticism of CentrePointe over the past few years has been its economic viability.  We’ve spent a lot of time deconstructing the economics of CentrePointe, and whether it can ‘work’ as an economic entity.

In short, the project wasn’t – and still isn’t – realistic.

Despite the inclusion of SGA in the design of CentrePointe, the developers won’t be able to achieve the levels of occupancy needed to make the project successful.  (Both prices and occupancy were far in excess of the Lexington market.)

The project also needed the infusion of Tax Increment Financing (TIF) from the state and city to help pay for ‘public’ improvements to the site (including sidewalks, parking garage, storm sewers, and other infrastructure).

The city and state would issue TIF bonds (debt) to pay for today’s improvements, and would pay them back with interest by harvesting future tax revenues coming out of the CentrePointe site.

And, as we have shown before, the CentrePointe TIF – based on incredibly optimistic assumptions – never pays back the city or state for their investment.  In essence, TIF amounts to corporate welfare for the developers.

And no knowledgeable bond analyst would ever recommend the CentrePointe TIF to his or her investors.  It would never pay them back.

Over the past three years, CentrePointe seemed like a lose-lose for Lexington: We lost if the project wasn’t built; we lost if it was built, too.

CentrePointe was a bad idea.  And it was badly executed.

The new approach to designing CentrePointe is different: This new design incorporates so many great ideas, and it seems to function so well with downtown Lexington.

While still deeply skeptical about the project’s economic viability (and its value for Lexington), we find ourselves pulling for this vision of the project – just a little.

This CentrePointe seems like a good idea – maybe even a great one.  And that’s the first time we can legitimately say that about CentrePointe.

But great ideas are the easy part.

Now, the community’s attention must turn to the hard part of CentrePointe: Execution.

The transition to execution poses new challenges for the developers and for Studio Gang.

How will the project find funding?  Can they conceive a more realistic plan which pulls back from today’s more ambitious design?  Can they make a 20-story tower work, for instance?  Can they craft an economic model which doesn’t rely so heavily on TIF?  Can they build smaller parts of the project today, and finance the rest when the economy improves?

The future of downtown might rest on the answers.

UPDATE 7/18/2011: Jeff Fugate has an excellent post on what the new design of CentrePointe accomplishes over at ProgressLex.