The Promise (and Predicament) of CentrePointe 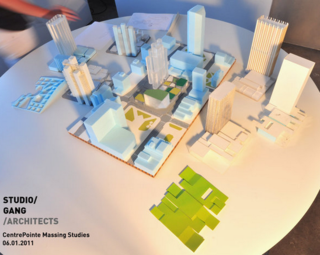 Since CentrePointe was initially proposed over three years ago, the project has been marked by fantastical bluster, broken promises, poor designs, and, ultimately, a failure to build.  All of which was compounded by the developers’ riteously indignant, arrogant, and combative attitude when challenged on the wisdom of CentrePointe.

A couple of years ago, after declaring CentrePointe an impossible-to-build failure, we outlined some basic principles for reconceiving the (still) empty block in the heart of our city.  Here’s an abbreviated excerpt from that post:

After three years of apparent tone-deafness by CentrePointe’s developers, the prospects for such a “signature place” seemed quite dim.

On the sweltering third floor of the old courthouse yesterday, an overflow crowd of some 300 Lexingtonians received a tantalizing glimpse of a new approach to the CentrePointe project.

And that approach represented an enormous (and refreshing) step in the right direction.

With the encouragement of Lexington’s new mayor, the developers engaged Jeanne Gang of Chicago’s Studio Gang Architects (SGA) to rethink the CentrePointe block.

On Thursday, she present preliminary site design concepts for the CentrePointe block.  And she presented a marked departure from the old approach to CentrePointe.

Gang’s presentation and the developers’ new approach are refreshing in a number of ways:

The mayor and the developers and SGA are to be commended for crafting this new approach to CentrePointe.

The chances for creating a unique, signature place for Lexington went way up yesterday. And the developers deserve some credit for allowing that to happen.

Despite the new approach to designing CentrePointe, a number of nagging issues remain for the tortuous project.

While Gang’s site design breaks up the monolithic tower of previous CentrePointe concepts, it appears to maintain the overall square footage and volume of the last iteration of the project.  If the project is roughly the same size, it should be roughly the same cost – around $200 million.

And if the developers have had difficulty lining up financing for the past three years, what will allow them to line it up now?  The commercial real estate market remains deeply depressed, and it isn’t clear that such abundant premium space would find tenants in Lexington.  The business model issues we identified early in the project haven’t fundamentally changed.

Is it possible that the new design will be so revolutionary, so inspirational, so great that investors and tenants will line up around the CentrePointe block to get in?  Perhaps.  We’d be thrilled.  But we doubt it.

In CentrePointe’s case, the city and state would finance about $50 million in improvements – a parking garage, sidewalks, storm sewers, etc. – around the project, and they would hope to recoup that investment from new taxes generated by CentrePointe.  In previous analysis, we’ve found that the CentrePointe TIF is highly problematic, and that it is doubtful that the city or state would ever get their money back.

Even though the new design direction is encouraging, several other aspects of the project are still unresolved.  Is the project the appropriate scale for Lexington?  Can it find willing tenants? Can the developers nail down financing?  Is the TIF worth the up-front expense?

The developers find themselves in a dilemma: If their project falls below the $200 million mark, it will be much more realistic to finance and to find occupants.  But it will lose the $50 million boost from TIF financing.

If the project comes in over $200 million, it is much more difficult to finance and occupy, and the opportunity for financing the project in the next 5 to 6 years looks grim.  (The TIF agreement between the Kentucky Economic Development Finance Authority and the city specifies that the $200 million be spent by January 2015).

We applaud the developers’ new, more-open approach to designing CentrePointe.  Bringing Jeanne Gang and SGA in to rethink the site is a welcome departure from the past three years. As frequent critics of CentrePointe and its developers, we’re very encouraged by the new direction of the project.

But because the economic challenges to the project linger on, we’d like to see a more open, more flexible approach applied to the execution of the project as well.  Perhaps the project could be built progressively or in stages, to allow for further construction as new financing becomes available. Perhaps it could be downsized to multiply financing options.

If – and this is a big ‘if’ – the developers can rethink their business model the way they’ve begun to rethink the design, the future of CentrePointe may be bright indeed.

UPDATE 6/6/2011: Graham Pohl now has a fine post up on an architect’s perspective of the new CentrePointe design and process over at ProgressLex.

3 thoughts on “The Promise (and Predicament) of CentrePointe”